This is how it all started

It's not so easy to say when everything began or found its start. For us, it was probably always the view of the stars that filled us with fascination and a little awe as children. At some point, the much longed-for first telescope arrived, which at that time still cost a small fortune, with which one could observe the first lunar craters and planets.

Later, a simple observation was no longer enough and we started to capture the "wonders of the universe" photographically. Of course, we imagined it to be easier than it was. We quickly sold the old telescope, got a new one with computer control, and strapped a camera to the back, and we took the fantastic photos we know from the Hubble images.

If only it were so easy! Endless aligning of the telescope, the eternally long search for a guide star, etc. often made the nights at sub-zero temperatures a torture and when then finally everything ran, clouds often moved in. To save the constant setting up and aligning for astrophotography, there was only one solution - an own observatory was needed. 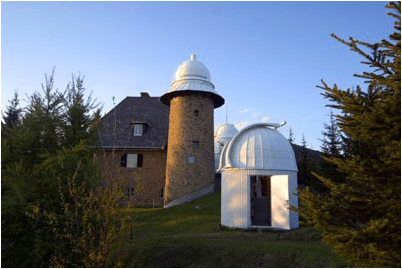 AMOS I with Kanzelhoe in the background

Building your own observatory is not an easy task. In 2003, amateur observatories were rare and information on the Internet was still scarce.

By chance, we got the opportunity to use a small test observatory of the Kanzelhöhe Observatory, which was unused at that time, for 1 ½ year. This allowed us to test our ideas with our equipment and finally to see if we could implement our ideas at all.

The right solution for every problem

Of course, we immediately set about setting up the observatory with our existing equipment. Actually, one should believe that from now on everything ran smoothly. However, we unfortunately had to realize that a smooth functioning of the equipment, even in an observatory is not as easy to realize as thought.

Our first telescope in the observatory was a Celestron C11GPS in a fork mount. According to the manufacturer, it is perfect for astrophotography. Since long exposures with a fork mount are only possible in conjunction with a polar wedge, or field derotator, we decided to have a very stable polar wedge constructed by a friend. The polar wedge and the C11GPS harmonized perfectly with each other, at least visually.

As it is known from many descriptions, our instructions were not very satisfactory, our telescope was e.g. constantly of the opinion that Sirius was somewhere on the ground in front of the observatory so that we looked for alternative instructions on the Internet.

We also soon found a good video tutorial from an American, but this had only ONE small catch, the American dialect was difficult to understand and so we needed about 1 hour until we could finally understand the keyword "Celestial Pole".

Now that we knew how it worked, we got right to work aligning our telescope. After about 4 hours of careful setting up, we connected the camera to the telescope and took the first test image.

Of course, we had expected a nice shot and reasonably round stars right away. Well, the stars were round, but strangely each star was a quadruple star.

At some point, long after midnight, we gave up looking for the error and decided once again to search the Internet for solutions. After some time of research, it became clear to us, it can not work, because contrary to what the manufacturer promises, the fork mount does not withstand the loads in the long term in the inclined position, so sooner or later it comes to problems even with a new telescope.

Unfortunately, this was an immediate problem with us; a friend was able to continue taking pictures with his C11 for a full 6 months after our conversation before his mount also confronted him with the same problem. 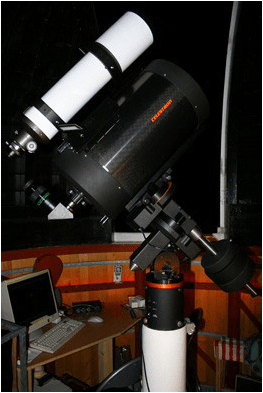 C11 on the CGE with guide scope

A new mount is needed...

After consulting with our dealer, we decided on the CGE from Celestron. I would like to briefly note here that we did not yet have the CGE X which is now on the market, but the first generation of CGE mounts.

The CGE already made a very good impression when unpacked, stable, large-dimensioned and it carried the C11 without problems. After we had adjusted them, we have of course immediately made a test photo. Well, what can I say now? Of course, we had a problem again.

It was positive that we didn't have any quadruple stars this time, but she did something great and new: each star was displayed as a "Y". Interestingly, however, not as a pure line trace, but always at the corner points of the "Y" as a fixed point.

It took us about a month to find the source of the problem. From Celestron support, we had heard at the beginning of the troubleshooting the sentence, quote: "The telescopes are manufactured in California, there it does not get so cold and therefore it does not work at your location", which made it clear to us that we probably had to find the error alone. It should be noted that it was about +16°C at that time and I think I remember that it also gets below +20°C in parts of California.

After closer inspection of the gearbox, we noticed that it suddenly stopped running during operation and then continued to run again for no apparent reason.

We decided to shoot a video of it and send it to the support, which fortunately replaced the mount without any problems.

Finally everything is running and we take pictures

I have to say that we were more than satisfied with the CGE and anyone can have the misfortune to get a Monday mount. But the replaced CGE worked flawlessly.

As you can see in the photo above, we have already pushed the CGE to its limits. Under full load, the CGE carried the C11, a refractor 102/660, the Canon 20D, and the SBIG ST-4 without any problems.

AMOS I in der Langzeitbelichtung 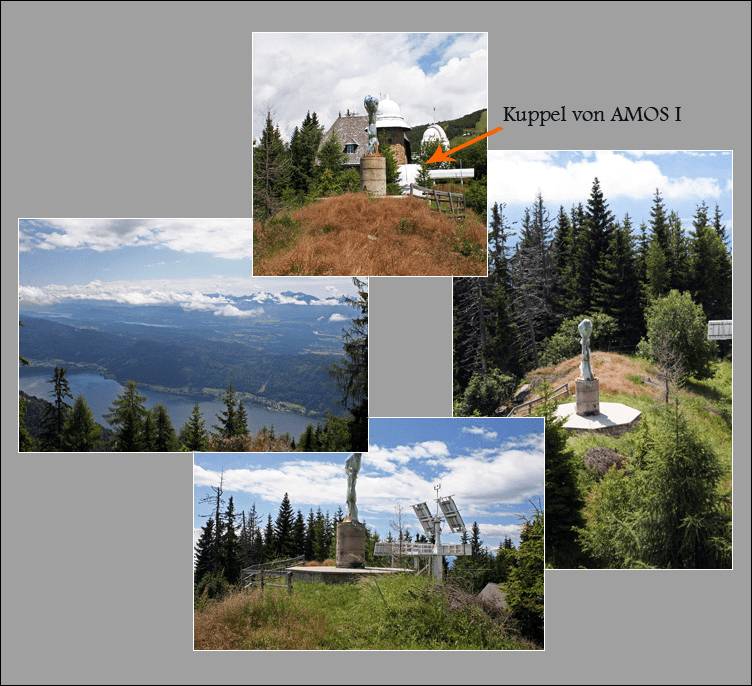 AMOS II - Back to the start

After we needed over a year to get the observatory running fully automatically photographically, including the development of our own dome control, the test observatory was again needed by the observatory for its purposes.

For us it was quickly clear, we build our own observatory, AMOS II. A few meters next to AMOS I there was a foundation with a column, which was concreted several years ago. After discussions with the Kanzelhöhe Observatory, the University of Graz, and the BIG, we were able to build our new observatory on this foundation.

What we didn't know at the time was that it would take another 5 years from the first talks to the start of construction, during which we were able to realize our dream with the help of sponsors.

The construction of AMOS II